It promises to now be a balmy early September but I’m ready for autumn cooking.

This apple and almond crumble is probably the most delicious I’ve made, although there will also be plum and then pear and ginger to follow.

One large round tevsija or similar oven dish

To serve 4 people or keep in the fridge for follow-on meals and a breakfast treat with yoghurt.

Put all these ingredients in a pan and simmer until the apples are soft and a little mushy.

Then half a cup of  plain flour – any kind – ordinary, GF, wholemeal

Rub all this together until you get a rough crumbled texture.

Then add a good handful of flaked almonds and stir.

Pop the apples in the oven dish followed by the crumble topping.

Bake on a medium heat for 45 minutes. 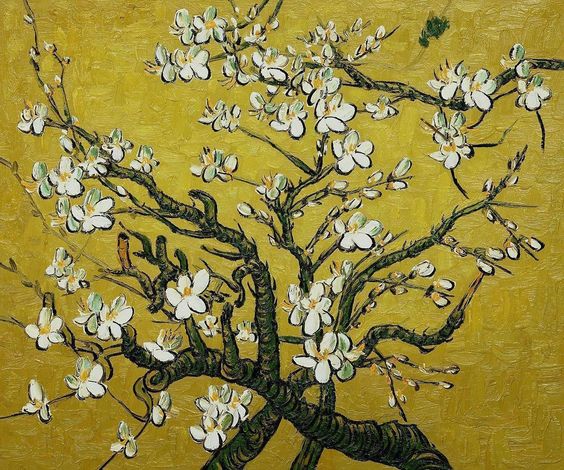 Branches of an Almond Tree by VV Gogh

I was asked to write a little something as a guest blog for Women Writers, Women’s Books.

Here is a link to the piece on their website. It’s about Meraki.

And here’s a Van Gogh, just because I love it.  Almond Blossom.

I assume it’s children, but not everyone would agree with me. Constantly investing pre-birth to eighteen must surely bring rewards, especially if all children are invested in.

Looking at policy today in the UK – Every Child Matters (I believe the Tories have crossed out ‘every’) and GIRFEC (Getting It Right For Every Child) in Scotland, I should probably be nodding my head in approval of such inventions of the state.

The bit that’s missing is stimulating creativity. I wouldn’t argue too much about the provision of care and concern for a child’s welfare  except of course, the social worker has handed over most of their responsibility to the teacher. Teachers I know are not pleased about this. They see their role as to educate and to not be responsible for life issues.

A couple of weeks ago I visited London, I hadn’t been for eight years. It was to meet with UK-wide organisations prepared to stand together in support of children’s rights to the arts. The momentum is building and more organisations are coming on board. Everyone knows we are about to hit a crisis. Financial, yes. But greater than that – our children’s’ well-being.

I went to visit a couple of galleries in London, my art-fix replenished for a couple of months. And in my mind ran the conflict between great art on the walls of the National Gallery and our resolve to fight for arts provision for children. If I took the sunflowers and sold it, what would that pay for. But no. I think of the man, I named my child after and can only believe that we need to see that painting to understand the artist. To appreciate not the piece of art, but Vincent.

Looking at the sunflowers in the flesh, something appears that doesn’t exist in thousands of reproductions – Vincent’s soul. I went in to the gallery thinking I would be boosted by the sunflowers, instead I came away with an ‘Oh’.

Oh, each flower said something, each angle. It wasn’t a sunny painting. it was quite flat. He hadn’t painted a fresh bunch of sunflowers, but a wilting collection probably sitting in stagnant water. And unlike our picture-perfect pre-raphaelites, it was probably only Vincent who had done all the work on the canvas. So it was all about him. I had deluded myself somehow on the way to the gallery, but met with a man’s state of mind that brought me down to earth.

We all love him though, we know about his life, his own torture (with thanks to Kirk Douglas!), a song in his name, replicas of his work all around. His style has heavily influenced design, not many western households have bypassed his blues and yellows.

What’s all this to do with children’s rights? State of mind. We created art as a way to explore our ever-more complex selves, and the child does that naturally. We halt the process by denying further exploration, or limiting it to a few young people.

It would be interesting to see how Ireland, Wales, England and Scotland collaborate -will there be a broad approach or will it involve localised cultural claims. I sit back and wait and watch.

In the meantime, there is the international arena to worry about. Out there, people and organisations are working hard to maintain or try to build a level of dignity in children’s lives. We have a long way to go, but we have come far already.

Keep your eye on the road and keep going, no matter the rain or shine. Change is inevitable. Go see art and let it speak to you, take your kids, your youthclub, your unruly sullen teenagers and spend a day in a gallery. Mine went with his father the last couple of days to London, so am looking forward to a hearty discussion all about art.

BTW the OU do great art history courses -would fully recommend them, especially Art and its Histories and Modern Art.

I live in hope of a National Gallery in Inverness!